Check Out The Beautiful Photos From The White Wedding Of Prez. Akufo-Addo’s Daughter To Kofi Jumah’s Son; Aliko Dangote And Others Attend 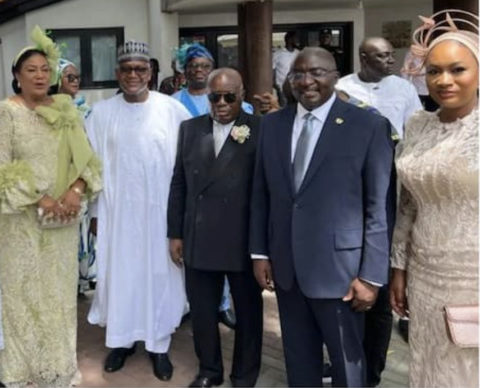 Around October last year, the traditional marriage ceremony between the daughter of Ghana’s President Akufo-Addo and the boss of GIHOc Distilaries, Maxwell Kofi Jumah became a big top on social media after the ceremony at the Flagstaff house of Ghana.

Many netizens at the time questioned why the whole event was kept in the dark as though it was one of the most treasured national secrets.

Despite all that public outcry at the time, president Akufo-Addo’s daughter and Kwabena Jumah Saturday, April 23, 2022, had a secret ceremony for the white wedding.

Even though the event was with tight security some photos and videos and photos have surfaced online and are available to zionfelix.net.

Aside from the rich Ghanaian personalities who were around, the Nigerian businessman who is rumored to be Africa’s richest man, Aliko Dangote was also in attendance.

Sarkodie Is Too Ignorant, His Endorsement With Samini For Nana Addo...