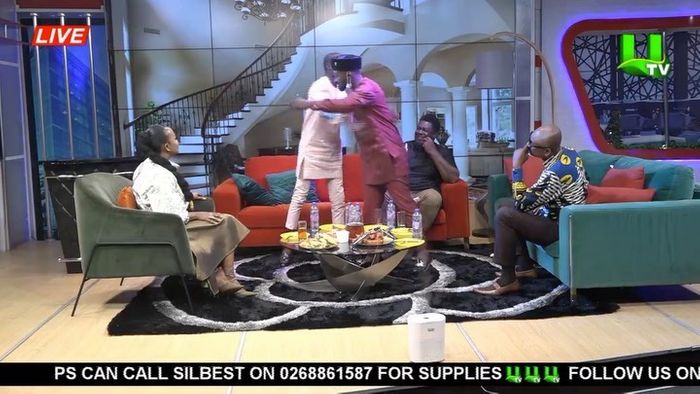 Over the weekend, a feud (that could have turned into a rather bloody one if care was not taken) between two of Ghana’s laughter creating actors, Funny Face and Kwadwo Nkansah Lilwin was amicably settled on UTV.

The two award-winning actors who were supposedly tricked by the media network’s managing director, Fadda Dickson Narh nearly got themselves ‘entangled’ in a fistfight in the early minutes of the show.

READ ALSO: Funny Face After Unity With Lilwin Pens Down A Touching Message

Funny Face, who was actually the last person to join the set for the show in some videos which have gone viral was heard throwing tantrums before he even sat down.

This move by the ‘Kasoa Trotro’ show creator saw Lilwin react in the same manner. Tempers flared and a show which is noted for its unique and special entertainment and educative benefits was nearly marred.

It was however saved by two individuals who were also on the set to help the discussion that very evening.

When the show’s host, Empress Nana Ama Mcbrown was completely lost and could not believe what the two were doing, artiste manager and entertainment critic, Lawrence Nana Asiamah Hanson, popularly known as Bulldog and renowned counselor and life coach, Kweku Adumata stepped up to actually become the unsung heroes for the night.

READ ALSO: After Uniting With Lilwin, Funny Face And Nana Romeo Patch Up

Whereas some schools of thought and a lot of the social media comments suggest that the whole thing was staged just for likes and the trends, I would beg to differ.

I saw two individuals, who most definitely were going through a lot and were dying to show the world that indeed they were not timid or cowards, without recourse to the consequences of their actions on either their brands or the media network.

However, the boldness of Bulldog to man up and be the main barrier between the two when they wanted to go at each other on live television and the wise counsel offered by Uncle Kweku Adumata were indeed key things that salvaged the situation.

While many people have said that Fadda Dickson’s intervention and simple gaze coupled with a very firm rebuke put some senses into the heads of Funny Face and Lilwin, I say that he did well but Bulldog and Uncle Kweku Adumata did the better on the night to salvage the situation.

Stop Wasting Our Taxes On Sports And Invest In Music And...