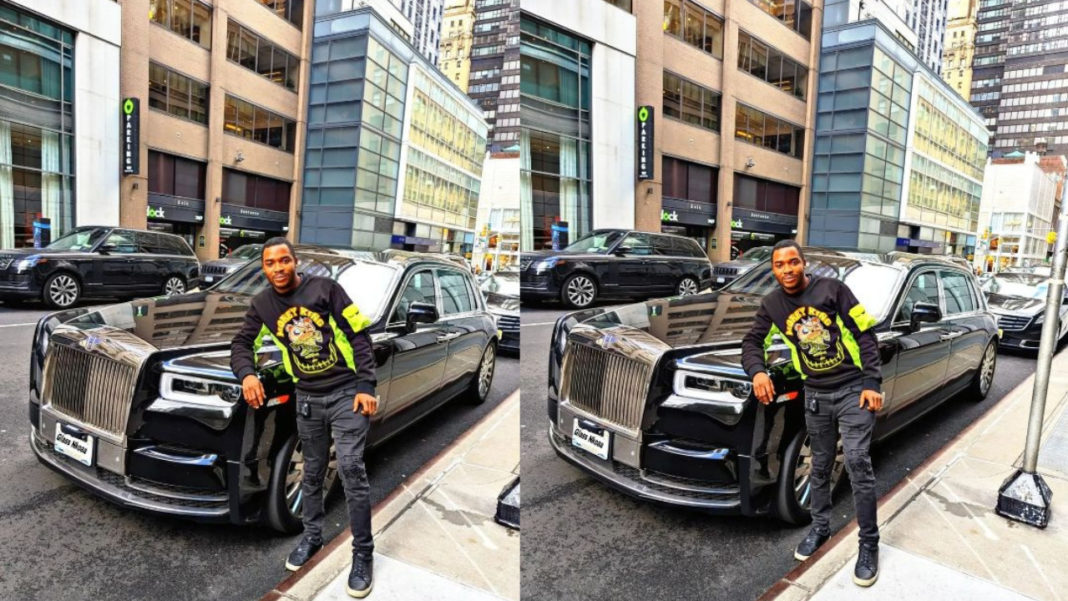 Twene Jonas‘ fake life is getting out of hand and he needs to take a second look at how he’s leading the youth astray with his non-existent buoyant lifestyle on social media.

Twene Jonas who always chides our celebrities for living fake lives on social media appears to be the president of the FAKE LIVES ASSOCIATION on social media at the moment because this ain’t the first time he has been caught red-handed flaunting a property that isn’t his.

READ ALSO: My beef with Stonebwoy was staged – Ayisha Modi spills it all

Just last week, he shared a picture of himself posed beside a Lamborghini but it was later found out that he wasn’t the owner after netizens zoomed into the number plate of the car and found out that it was edited.

In this set of new photos also, Twene Jonas posed in front of someone’s Rolls Royce parked on the streets and photoshopped the number plate to his famous ‘Glass Nkoaa’ cliche.

As lied by the socialite in the caption he attached to the photos, he bought the Rolls Royce for 28 million US dollars.

Remember your dreams and fight for them. You must know what you want from life. There is just one thing that makes your dream become impossible, the fear of failure. Never give up 💪🏽 Weekend vibe😍 I’m chilling in my $28 Million, Rolls-Royce Boat Tail. Life is good in Heaven on Earth 🙏🏾 Glass Nkoaa 🔥 We run the city 🏙️🌆 The system is working 24/7💪🏽 Hw3 fomm 🥰 Didi free ❤️

Below are some of the comments from social media users who can see through his heavy lies.

phillme_22 – Just b real and stop faking. Ain’t any dfrnc btwn u and the ppl u rain insult on bro. U deceiving viewers or urself. Pp who tranna make outta smtin r the same ppl doing shit.

vanz_london – Fake plate, you don’t own it bro but still like you

akwasipollux8 – This guy is a joke .. anyone who follows him is a big joke too. how can u insult our intelligence? Is this car a boat tail? Only jay z and his wife own one .. they will not even sell it to you.. gxxfy.

READ ALSO: VIDEO: Ayisha Modi finally confirms going under the knife to get an excellent physique