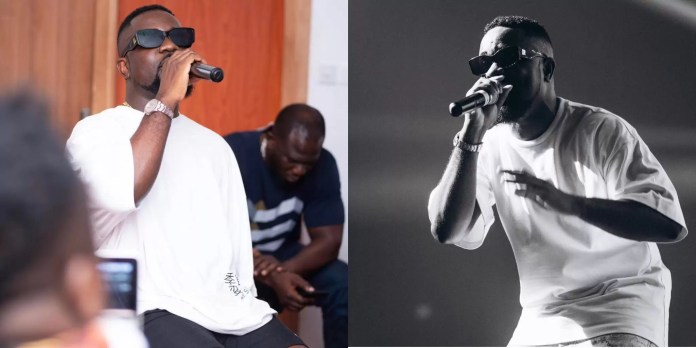 The boss of Sarkcess Music, Sarkodie has decided to give merchandising as a top Ghanaian musical artiste another chance.

Even though his first try with the much-talked-about Sark Collection was not the best in terms of revenue returns, Sarkodie has announced that the iconic sunglasses he has been dripping is currently on sale for all his fans who want one.

READ ALSO: Ogidi Brown’s New Artiste Sends Out Stern Warning To Him After He Threatened To End Fameye’s Life With Antoa (Video)

Earlier this morning, he took to his Instagram page to share some photos of himself looking very fly in the sunglasses as he made the announcement.

According to his post seen by zionfelix.net, the newly-launched “Obidi Sunglasses’ can be purchased online and it is going for Ghc200 — a price that is obviously not for the everyday person.

“Y’all seen me rock it a couple times NOW you can get it too “OBIDI” Sunglasses by @railsoflondon @trendyrail www.railsoflondon.com”, he wrote.