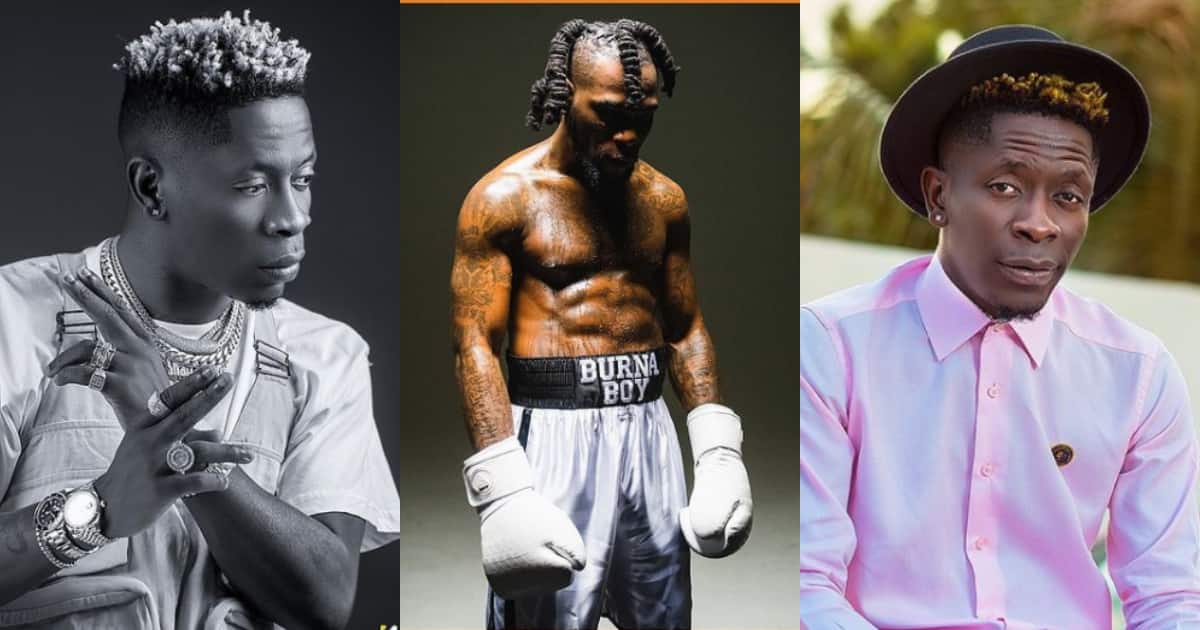 In the last 12 hours and more, Ghana’s Shatta Wale and Nigeria’s Burna Boy have been engaged in a battle of words on Twitter and Snapchat to satisfy their egos.

They have been going back and forth with threats of probably k!lling themselves if they should meet physically anytime soon.

As they jabbed each other on social media, Burna Boy decided to describe Shatta Wale as a poor guy and stressed that he is richer than all the godfathers of Shatta Wale combined.

This jab appears to have struck a nerve in Shatta Wale who has in reaction decided to drop some supposed secrets of Burna Boy and recounted the days he used to feed and cloth the Nigerian artiste.

READ ALSO: Sadiq Abu Calls Out Shatta Wale For Failing To Perform At Wildaland Festival Despite Taking The Agreed Fee

Shatta Wale during his attack released a throwback video where he used to house, feed and clothe Burna Boy when the artiste was trying to make headway.

Sharing a video on Twitter to make his case, Shatta Wale described Burna Boy as an ingrate who has failed to appreciate the investment he made into his life and career in order to help him get a strong footing in the music industry.

See jon ,from head to toe ,I didn’t like the dress but you insisted .. like my garden boy ..😂 pic.twitter.com/QA501gYIx3

READ ALSO: Burna Boy Rejects Shatta Wale’s Request For A Lyrical Battle, Asks Him For A Fistfight Instead And Threatens To Be@t Him To A Pulp (+screenshots)

Shatta Wale also alleged amongst other things that he steals and borrows watches and chains.

According to the SM President, Burna Boy lives a fake life just to fool his followers on social media and made some damning allegations about the fact that Burna Boy borrowed a Richie Millie wrist watch and chain…in other instances stole them.

The richard Millie you come borrow from biggie ,did u buy it yourself … Burna toy , how much kwraaa u get ..when I showed you my houses in ghana ,you were asking if it was music money ,kwasiaaa boy like u ..don’t be a pussy cuz u know I don’t roll like that ..

Shatta Wale also added that Burna Boy stole a gold chain from a dealer in Accra and he’s currently on the wanted list. “The gold chain you took from KB by force Abeg bring am .. He wan beat u sef now now now …you have stepped on many toes ..you violate ..Ghana will be like mini skirt for you !!!trust me“

Shatta Wale further said that Burna Boy’s music career will experience a devastating shipwreck which will lead to his end.Dissing my godfathers is Foul for a Fowl like you . You won’t enjoy music again ..mark this … Go give biggies richard Millie to him ,he said you stole it !!!

Share
Facebook
Twitter
Pinterest
WhatsApp
Previous articleBurna Boy Rejects Shatta Wale’s Request For A Lyrical Battle, Asks Him For A Fistfight Instead And Threatens To Be@t Him To A Pulp (+screenshots)
Next articleBurna Boy Apologizes And Finally Walks Away From The Shatta Wale Beef
- Advertisement -