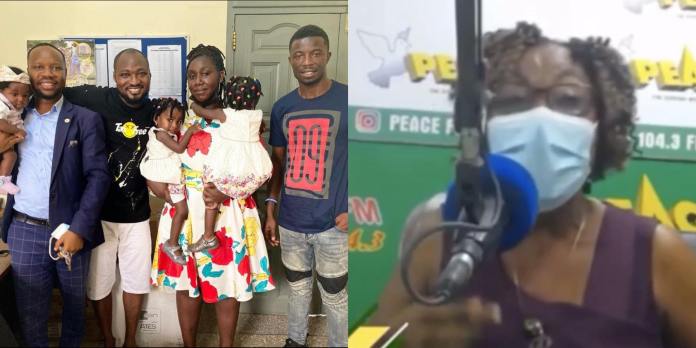 A lot of social media users have reacted angrily to the claim of the family of Funny Face to sue Kwaku Manu for sharing some photos and videos he took with him when he recently paid a visit to him at the Accra psychiatry hospital with his baby mama and kids.

On the Thursday edition of Peace FM’s entertainment review show, an elder sister of Funny Face called Lydia Boateng angrily condemned Kwaku Manu for the photos and videos he shared online because the matter is in court.

READ ALSO: My Skits Are Longer Because Of YouTube Revenue – Akabenezer Likeee To Critics

After the video of their interview with Kwaku Manu was shared on Instagram, a lot of social media users have also blasted Kwasi Aboagye who is the host of the show and Funny Face’s sister, Lydia Boateng.

According to the netizens, Kwasi Aboagye‘s poster during the interview suggests that he had already taken a position on the matter.

Others also took a dig at his sister who said that the only aim of Funny Face is to make money from the predicament of Funny Face with his videos on Youtube.

Kwadwo Nkansah Lilwin Is ‘Crazy’! Check Out His Mind-Blowing Reaction To...