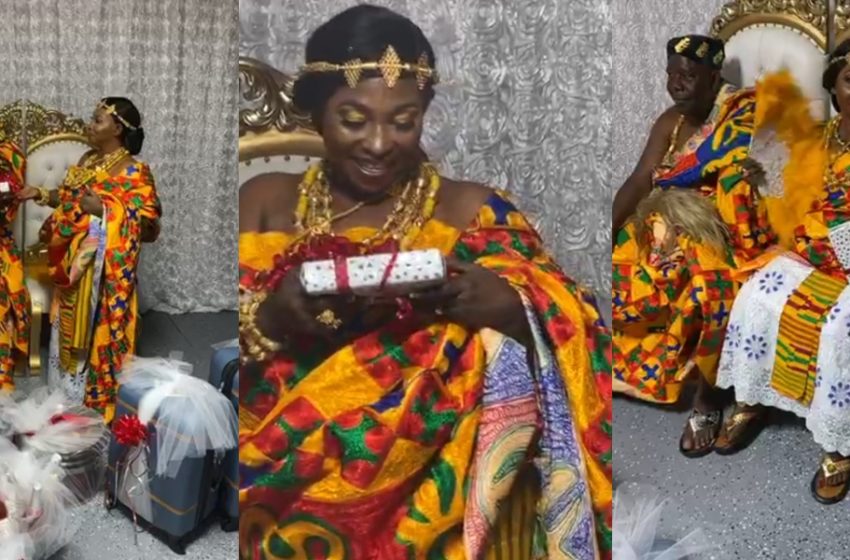 Zionfelix.net is in possession of exclusive photos from the traditional marriage of veteran Ghanaian actress Rose Mensah, popularly known as Kyeiwaa in the United States of America.

The marriage ceremony is believed to have taken place in Worcester, a city in central Massachusetts.

Photos from the event saw Kyeiwaa and her husband, Michael Kissi Asare, dressed in regal traditional Ghanaian Kente as they were joined in holy matrimony.

Some family members and friends clothed in Kente and Kente-inspired designs were also seen in attendance.

Attendees of the marriage ceremony were seen observing COVID-19 protocols as they were spotted in nose masks and also sat spacially.

Rose Mensah and her hubby were seen seated beautifully in the photos that were shared with Zionfelix.net.

The photos showed a preacher blessing the rings and allowed Mr. Asare to put the ring on Kyeiwaa’s finger.

Other photos showed the moment were the traditional rites of presenting the stuff on the engagement list to the family of Kyeiwaa.

Zionfelix.net broke the news of Kyeiwaa’s impending marriage months ago. However, the popular actress had to reschedule the nuptial due to the outbreak of the coronavirus.

The marriage has however been successfully done. The white wedding is set to follow tomorrow, July 25, 2020 at the same venue.

I Was Directed By God To Marry...