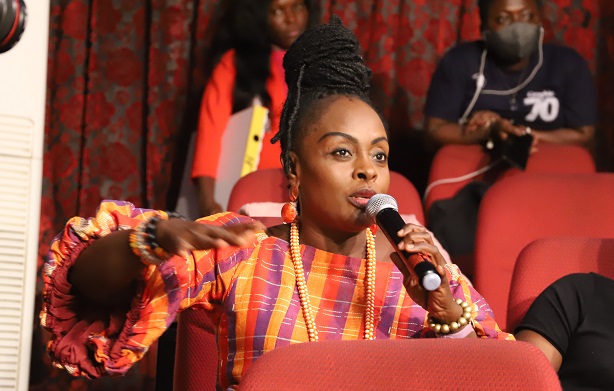 Panellists and guests who made it to the maiden Graphic Showbiz forum on the creative arts and tourism have called on the paper to hold more of such events.

According to them, more fora will give industry players more opportunities to let their voices be heard and also give the creative arts and tourism sectors the relevance they deserve.

The forum, which came off on Monday, November 23 at the Executive Theatre of TV3, was on the theme: “Moving from promises to action, a discussion of party manifestos on the creative industry,” and aimed at reviewin or assessing manifestos by the political parties as it pertained to the creative and tourism industries.

There was also representation by some political parties including Ekow Jones from the Progressive People’s Party (PPP).

Actor and Chairman of the National Film Authority, David Dontoh, also speaking at the forum

After initial statements concerning their areas and how well or not they have been represented by the political parties as well as follow up questions, the floor was open for contributions and the guests did not miss the opportunity to express themselves, chronicling the years of neglect and what can be done going forward.

One of the major issues that were highlighted at the forum was the need for structures for the creative and tourism sectors.

A bane of the industry has been the lack of structures and this was raised by several speakers including Abeiku Sagoe and Akwasi Agyemang who reiterated that point during their submissions.

Akwasi Agyemang asked industry players to be organised as it was a way they could effectively fight to get their issues addressed.

Abeiku Sagoe urged that there should be a more harmonious relationship among the tourism, creative arts and culture sectors, a point which Akwasi Agyemang agreed with.

READ ALSO: Lilwin Is Full Of Himself, I Don’t Like How He Talked To Me – Maame Esi Forson Goes Wild

“When the Ghana Tourism Authority introduced the “See Ghana, Eat Ghana, Wear Ghana, and Feel Ghana” initiative, industry people thought it was just something we were doing on our own so they didn’t take advantage of it,” he disclosed.

Others like musician Edem urged creative arts players to come together and present a document of action that any political party that comes into power would follow.

In the course of the two-hour event, the panel members and guests expressed excitement at the event and asked that Graphic Showbiz should organise more of such events.

According to them, such platforms were important to enable them to free their minds and seek solutions to the problems bedevilling the creative and tourism sectors.

In her welcome remarks, Editor of Graphic Showbiz, Adwoa Serwaa Bonsu indicated that from 2021, there would be a forum every quarter that would tackle pertinent issues.

The forum was in partnership with Media General and Cheezzy Pizza.

Shatta Wale Fingers 3 Music Boss, Sadiq As The Man Who...