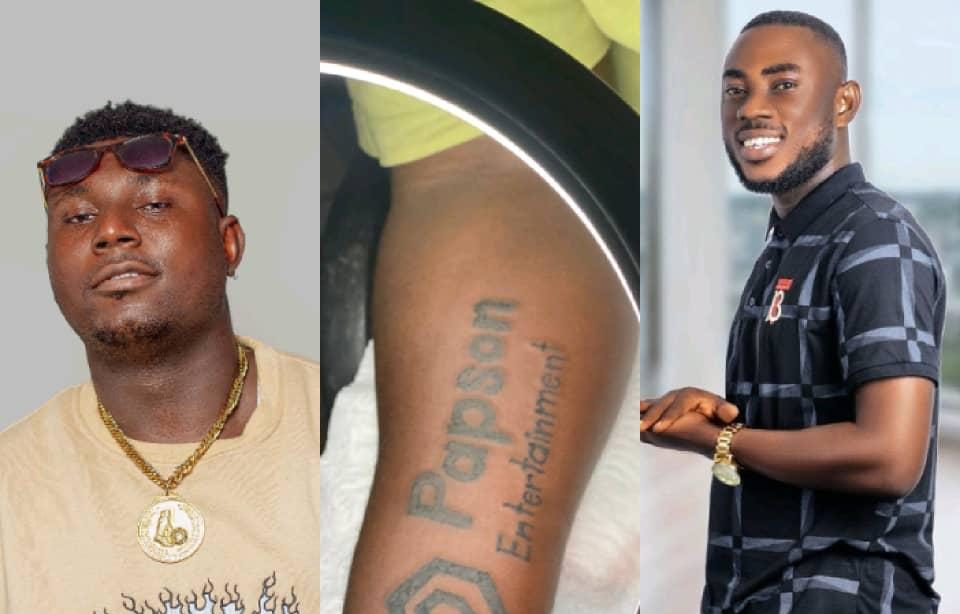 The talented rapper is currently enjoying a lot of airplay in the Western Region capital after he released his banging song, “Celebrate,” which features the party man, Quamina MP, to thank his manager and record label owner for honouring him with the signing.

READ ALSO: “Hw3 Ne Gyimi” – Tweeps Fire Kweku Flick After He Said His ‘King Of Melodies’ EP Is The Best In Ghana

Just when many thought that the song was going to be the award-winning rapper’s final way of expressing his gratitude to his manager and new label, Bobo Dada Bee has just done the unthinkable again.

From some photos and videos made available to zionfelix.net, the reigning best rap artist in the Takoradi metropolis has tattooed the name of his new record label boldly on his hand for the world to see.

From what we are picking up, Bobo Dada Bee believes this is one way to say a big thank you to the CEO of Papson Entertainment, Stephen Yawson, for giving him a brand-new car during his signing plus other mind-blowing goodies as a signee on his label.

Bobo Dada Bee Gets Brand New Car As He Signs For...